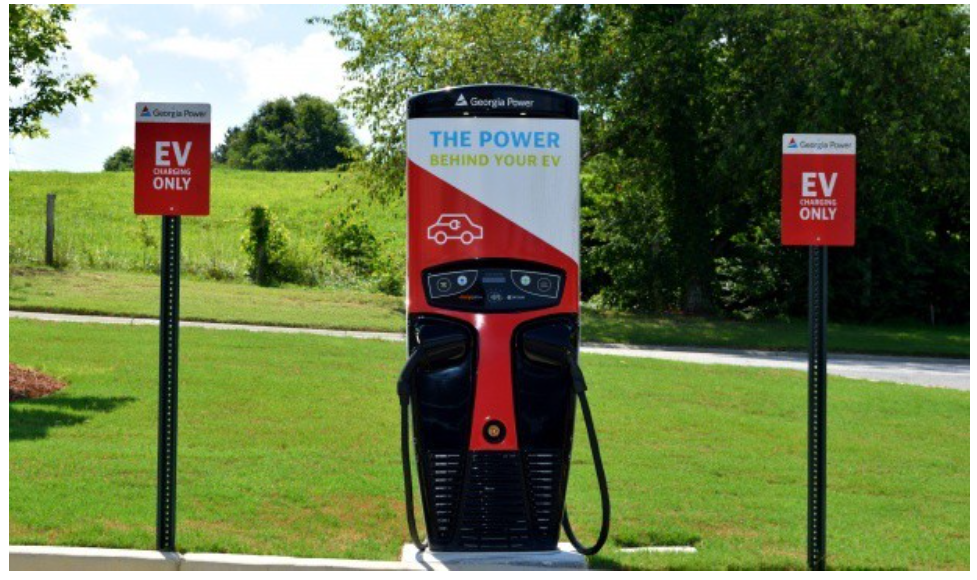 A pair of webinars this past week, one hosted by the RV Industry Association (RVIA) and one by the National Association of RV Parks and Campgrounds (ARVC), underscored how seriously the campground world views the oncoming onslaught of electric vehicles. While campground and RV owners remain mostly skeptical, questioning the costs, range, recharging availability and environmental impact of a lithium-based technology, industry leaders are unwavering in their belief that the EV-RV revolution is already here and that the problems others see are either overblown or will be resolved in timely fashion.

“We are really at an inflection point which is amazing,” Ashis Bhattacharya, senior vice president for development and advanced technology at Winnebago Industries, told his RVIA audience. A “wave of electric adoption” is already washing over rental car agencies, delivery services such as Prime, UPS and FedEx, as well as school buses and other municipal vehicle fleets, all of which is normalizing the technology. The paradigmatic shift already underway, Bhattacharya added, is as significant as any ever experienced in the transportation sector.

States are giving the EV sector a kick in the pants

Meanwhile, said Jay Landers, RVIA’s vice president of government affairs, state initiatives to outlaw internal combustion engines are giving the entire EV sector a kick in the pants. Five states, including California, already have voted to ban sales of new internal combustion vehicles by 2035, and others are looking to possibly follow suit. The state of Washington, which had the country’s sixth highest rate of RV shipments this year, is even more aggressive, adopting a 2030 cutoff deadline. Furthermore, expansion of the EV charging network nationwide is being super-charged by $5 billion in federal funding approved earlier this year.

None of which, all speakers agreed, is to minimize the problems confronting EV in general, and EV-RVs in particular. “The (EV) technology is still more expensive than what it’s replacing,” conceded MacKay Featherstone, Thor Industries’ senior vice president of global innovation. Moreover, he added, “the charging experience is utterly critical” and still inadequate for RVers in particular, both because most RVs need pull-through charging stations to be practical and because they have larger power needs than EV cars. 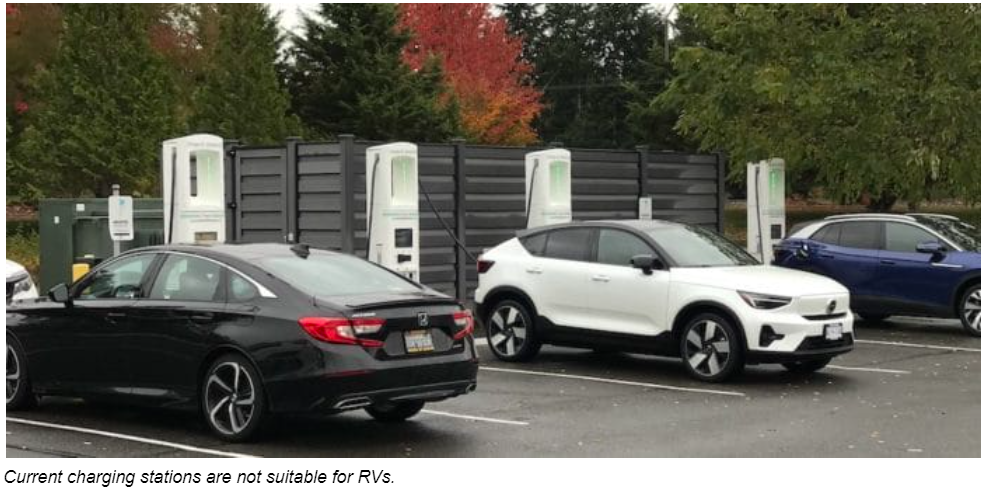 To their credit, RV manufacturers, frequently criticized for shoveling out hundreds of thousands of RVs without giving a thought to where their buyers might use them, are at least trying to get out in front of this development. And there is little reason to doubt that a society-wide change is coming, and coming hard. EV-RV costs inevitably will come down as sales take off, as they do with any emerging technology. Alternatives to lithium batteries, using less exotic minerals, are being developed, and advances in recycling technologies will further ease environmental concerns. Similarly, ongoing improvements in battery density will continue to expand vehicle range, relieving one of the biggest consumer anxieties about EVs.

THE WEAK LINK, however, appears to be the RV park and campground end of the product chain. The RVIA webinar inadvertently made that point when its campground representative on the panel—Toby O’Rourke, president and CEO of KOA—was so unintelligible that she had to be dropped from the screen, apparently because she was trying to link in from an airport. (And why O’Rourke, again? Is there no other campground industry representative who can speak to the industry’s issues? Maybe someone from the Yogi franchise, or ARVC, or one of the other large state RV park associations, like Texas or California?)

Subbing in for O’Rourke was Brandi Simpson, her chief of staff, whose faltering contribution was to assert that campground owners are dealing with “a ton of misinformation” about EVs and need a lot of education and guidance. Which, presumably, KOA is scrambling to provide…

… as is ARVC, which lustily beat the drum on behalf of EV-RVs at its national conference in early November, and again at an hour-long webinar a couple of days after RVIA’s face-to-face. Pitched as “a recap of the best” of the conference for those who might have been unable to attend, the session inexplicably ignored the most contentious convention issue—a proposal to adopt industry-wide “standards”—while devoting the majority of its time to further promoting the idea that campgrounds need to get on the EV bandwagon, starting with the installation of EV chargers.

All of which is undeniably true, but far more nuanced and with many more questions than have been answered to date. For example: Both webinars referenced possible tax breaks and federal grants to defray campground costs for installing chargers, while glossing over the reality that such inducements will require making the chargers accessible to the general public, and not just campground guests. Getting equally short shrift were any explanations of the occasionally mentioned “partnerships” that campgrounds might have to accept, whether with public utilities or third-party providers, to deal with licensing and infrastructure issues, since electric sales are typically a utility monopoly and EV chargers require robust additional power supplies.

(On a related note: One of the biggest frustrations for many KOA franchisees has been the parent company’s insistence on taking a 10% cut of all site fees—including any electric charges—even though campgrounds are legally prohibited from making a profit from reselling electricity. To the extent that EVs will increase electricity consumption at RV sites, that means even more unearned money transferred from franchisees to corporate headquarters.

No answer to who will pay

Indeed, the whole issue of who will pay for the extra electricity consumed by EV-RVs, and how, is still being sidestepped at the national level, quite possibly because there is no one answer. That, by itself, may become the biggest impediment to mom-and-pop campgrounds rushing into this brave new world. It’s notable, for example, that while ARVC now has an online “EV Toolkit” to help its members understand how to accommodate the new technology, the only guidance it provides for covering their costs is the vague advice to “consider billing for shorter stays, especially [campers] with unique equipment (large class As, EVs, electric golf carts, etc.), automatically billing those campers for the electricity they use.”

Presumably these and other issues will get resolved, sooner or later—once the industry stops talking around them. The RVing public, meanwhile, should brace itself for still higher costs, as a new electric sensibility starts percolating through the camping universe. Just as computerized reservation systems have introduced demand pricing and all kinds of add-on fees, the electrification push ultimately will result in all RV sites getting electric meters. Or as ARVC’s EV Toolkit asks, in a prominently displayed screen, “You don’t give away ice, candy bars or firewood, why give away electric?”

Andy Zipser is the author of Renting Dirt, the story of his family’s experiences owning and operating a Virginia RV park, and of Turning Dirt, a step-by-step guide for finding, buying and operating an RV park and campground. Both books are available through some bookstores or at Amazon.com.