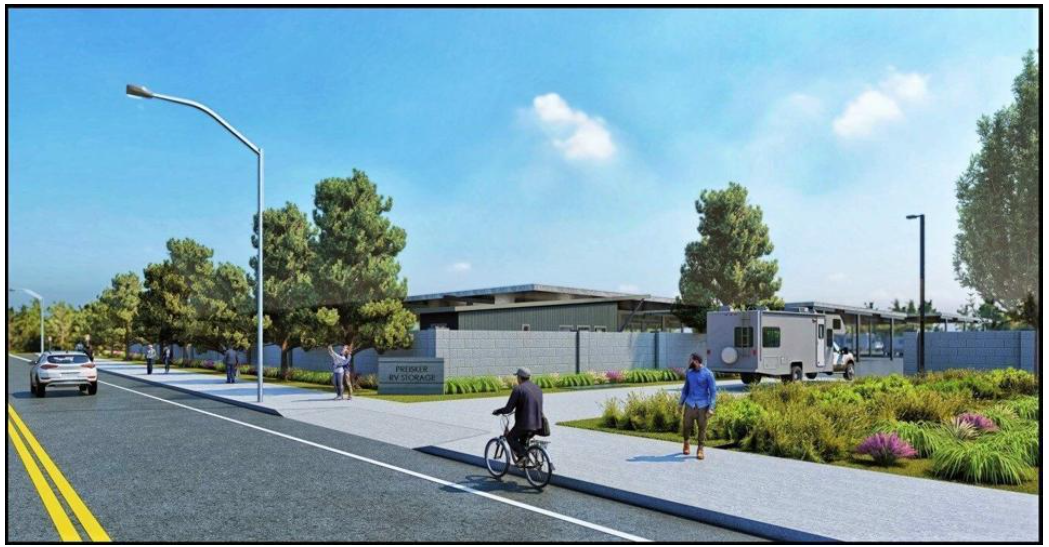 An architectural rendering from Atom Architects shows how the Preisker Lane RV storage facility might appear once completed. The project was approved on a recent 4-0 vote of the Santa Maria Planning Commission.

A recreational vehicle storage facility was approved by the Santa Maria Planning Commission for Preisker Lane in the California city, although commissioners are not happy with conditions imposed on the project the staff said are required by the Municipal Code.

Commissioners OK’d permits for TVJ Sons to construct the RV storage facility on a 3.3-acre site immediately north of Hampton Inn & Suites on a 4-0 vote after Commissioner Maribel Aguilar-Hernandez recused herself from the discussion.

Aguilar-Hernandez said the applicant had worked on her successful campaign for a seat on the City Council.

A total of 129 RVs could be stored on the site, with 72 of them in covered spaces topped with solar panels, and a sanitary dump would be available for customers’ use only. Day-to-day operations would be overseen by a caretaker living onsite in a modular unit adjacent to the entryway on the southwest corner of the property, which was formerly a KOA campground.

Jacob Weintraub, the applicant for the RV storage, said his company operates a self-storage facility and RV storage at Betteravia Road and A Street, where the RV storage is full, yet people come in every day looking for a place to store their RVs. “The zoning is looking … to create services for the needs of the community, and I think it is a huge need for the community to have this RV storage,” Weintraub said. “It would be nice to get RVs off the street and into a nice facility like this.”

Dana Eady, the city’s planning manager, told the commission the General Plan Circulation Element will accept a “D” or better level of service at an intersection, but at Preisker Lane and North Broadway the level of service is “F.” But a traffic study showed the RV storage would only generate 25 additional trips per day, with just four of those during peak traffic times, and that amount would have an insignificant effect on the intersection’s level of service.

Staff said it is likely the improvements proposed at the nearby Highway 101 interchange would include improvements to alleviate the traffic congestion at the Preisker-Broadway intersection, although no plans have been drawn up yet.

But commissioners were skeptical.

“When you say there’s going to be improvements … I don’t buy that argument,” said Commissioner Tim Siefert, who was also “quite disturbed” by conditions on the project that staff said are required by code. 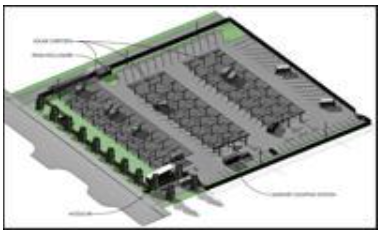 An illustration from Atom Architects shows a 3-D layout of the RV storage facility approved for Preisker Lane by the Santa Maria Planning Commission on a 4-0 vote last week. 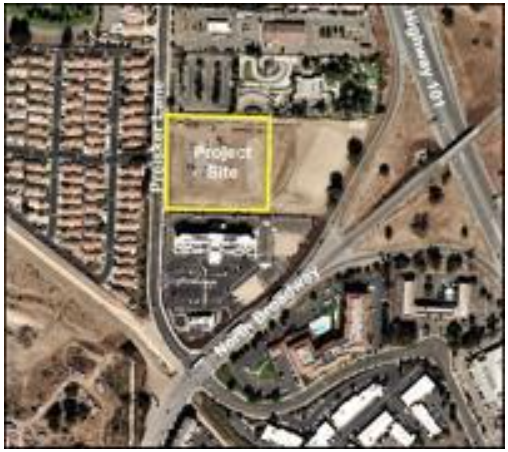 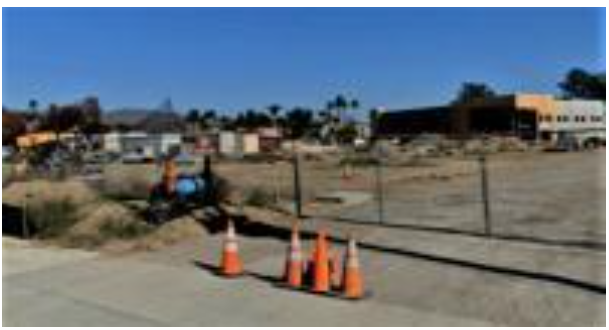 The future site of an RV storage facility on Preisker Lane in Santa Maria is currently a staging area for equipment being used in construction of the Carpenters Union Training Center at right.

The site plan for the RV storage facility, at left, on Preisker Lane in Santa Maria is shown in this map from a Planning Commission staff report that also shows the Carpenters Union Training Center, at right, that’s currently under construction.

The RV storage facility will be located adjacent to the Carpenters Union Training Center currently under construction to the east, and plans called for a tie-in to the sewer and fire-suppression water lines the union already installed, including a lateral line already in place to take the sewage from the RV storage.

Weintraub told commissioners the lateral sewer connection and fire suppression water connection for future development on his site was approved by the city in the Carpenters Union plans.

He said the condition now requiring TVJ Sons to install new sewer and water lines would add an estimated $100,000 to the construction costs, and he asked that the condition be modified to allow connection through the Carpenters Union lines.

“What we’re asking for here is a duplication of services that are already in,” Siefert said, asking if the “Y” connection under the street was correctly installed and if the sewage lateral could handle the capacity, to which the staff responded “yes.”

“I think we’re talking about a minimum of sewage here and a maximum of cost,” Siefert said. “And that disturbs me.”

The rest of the commission generally agreed. Commissioner Esau Blanco said tying the RV storage sewer and fire water to the Carpenters Union lines made a lot of sense, technically and practically. “But we have to be sensitive to codes and requirements, even though it seems a little impractical in this case,” Blanco said. “It seems like there would be a workaround.”

Commissioner Tom Lopez agreed with Siefert and Blanco. “The city has to have some flexibility,” Lopez said.

But Assistant City Attorney Heather Whitman said the separate fire water and sewer hookups are required by the Municipal Code, and the commission has no authority to change the code or grant an exception, which she said would set a “terrible precedent.” “There is a chance the applicant can work with the utilities director and make some changes, or there is the right to appeal,” Whitman said.

Siefert said he wanted whoever was listening to the debate to understand there are private sewers and fire hydrants all through the city, so this project is not unusual. He also decried the fact that residents on Preisker Lane and beyond will have to again deal with the same inconveniences they did when the Wendy’s and Hampton Inn projects were being connected to city pipelines.